Click here to view all obituaries
Search Obituaries
Immediate Need
We are here to help you. If you have need of our services, please call us, day or night, at:
(508) 839-4491
To better prepare yourself, we have provided you with some helpful information regarding the immediate need process.
Contact Us / Location 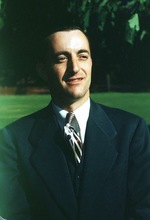 GRAFTON: Robert W. Bibeau, 95, passed away March 31, 2017 surrounded by his loving family. His wife of 50 years, Shirley (Carey) Bibeau passed away in 2000. Robert is survived by his children Bonnie Newman and her husband Bradford, Robert F. Bibeau, Karen Goulet and her husband Michael, Suzanne Ashley and her husband Stephen and Marie O’Malley, 7 grandsons, 4 granddaughters, 8 great-grandchildren and several nieces and nephews. His brother Norman Bibeau and sister Vivian Clark predeceased him. Robert was born September 29, 1921 in Worcester, MA son of the late Eva M. (Lamoreaux) and Frank L. Bibeau. His roots were in the Crow Hill neighborhood in Worcester where he graduated from Commerce High School. Robert served proudly in the U.S. Army as a Staff Sergeant in the Americal Division during World War II where his service spanned 4 years, 8 months, 12 days and 13 hours as anyone in his family could easily recall. Following his military service he attended Clark University and earned his Bachelor of Science degree in Biology followed by attaining his Master’s Degree from the University of Massachusetts with a specialty in Bacteriology and Public Health. Robert worked at Arter Grinder as a Machinist for several years before he joined the Worcester Foundation for Experimental Biology in Shrewsbury as a Research Assistant. For nearly 30 years Robert taught Chemistry at Wayland High School. During his teaching career he wrote an independent study program in Chemistry which was published professionally and used worldwide in addition to short stories. He earned his Master’s Degree in Education from Worcester State College during his teaching career. Away from work Robert could be found heading for the Cape Cod Canal or Scusset Beach or an afternoon on his sailboat during the summer or perhaps tinkering with model airplanes or trains at home. When he could find the time Robert also was thrilled to be close to aircraft taking off and landing as he was a passionate aviation enthusiast. For many years he was a faithful parishioner of his beloved St. Mary’s church in North Grafton where he served as a Lector and sang in the church choir. Robert’s true legacy was that of a devoted family man who kept those who loved him most close to him throughout his life and he will be dearly missed. Please honor Robert with a memorial donation to the ASPCA 424 E 92nd St. New York, NY 10128 or to Veterans Inc. 69 Grove St. Worcester, MA 01605. All are welcome to gather with Robert’s family Monday April 3rd from 5pm to 8pm at Roney Funeral Home 152 Worcester St. N. Grafton MA 01536. His Funeral Mass will be celebrated Tuesday April 4th at 11:00am at St. Mary’s Church 17 Waterville St. N. Grafton, MA 01536. He will then be laid to rest at Pine Grove Cemetery in North Grafton. A Book of Memories to share a story, photo or memory of Robert will be available online at:
www.RoneyFuneralHome.com
Printable
Share on Facebook
Recently Shared Condolences
Leave a Condolence
View All Condolences
Recently Lit Memorial Candles
Light a Memorial Candle
View All Candles
Recently Shared Stories
Share a Story
Recently Shared Photos
Share a Photo
View All Photos