In Memory of
Donnie Doyle
Whitlock
1954 - 2018
Click above to light a memorial candle. 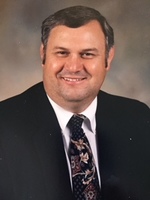 Donnie Doyle Whitlock, 63, of Greenville, went to be with the Lord on Wednesday, March 28th, 2018.
He is survived by his loving wife, Wanda Whitlock; his adoring children, Josh Whitlock (Avi) and Marie Campbell (Daniel); his sister, Kathy Morgan (Steve); sister-in-law, Jean Whitlock; and grandchildren, Victoria, Savanna, Breanna, Moriah, and Josiah.
He was preceded in death by his parents, Doyle and Sarah Whitlock; and brother, Garland Kenneth Whitlock.
Dr. Whitlock's life truly began when he was saved at the age of five years old at Tabernacle Baptist Church's Vacation Bible School. He was called to his life's work as a missionary when he was 15 years old. He and his wife, Wanda, first served the Bahamas when they were 20 years old. While he served multiple countries in Asia, he spent most of his time in Indonesia and the Philippines. While serving in Indonesia, he also started Mass Media Outreach Ministries which produced printed materials to use for his ministry and others around the world. Besides the Mass Media Outreach, his greatest outreach was in the Philippines. He had huge freedom to preach to all people, from the political leaders to the impoverished people. He particularly loved his outreach to the poor people.
He was an awesome friend to all who knew him. He could speak to anyone. He and his wife would be shopping and she would come to find him witnessing to a new friend as he never knew a stranger. Friends and family will greatly miss him, but they know he is rejoicing with the Lord.
The family will be receiving friends and family at Freedom Baptist Church 1907 West Parker Road Greenville, South Carolina 29617 on Monday, April 2nd, 2018 from 5:30 pm to 7:30 pm. The Funeral Service will follow at Freedom Baptist Church 1907 West Parker Road Greenville, South Carolina 29617 on Tuesday, April 3rd, 2018 at 10:00 am. Join the family at Graceland West Memorial Park, 4814 White Horse Road, Greenville immediately following the Funeral Service.