Click here to view all obituaries
Search Obituaries
Immediate Need
We are here to help you. If you have need of our services, please call us, day or night, at:
812-333-4400
To better prepare yourself, we have provided you with some helpful information regarding the immediate need process.
Contact Us / Location 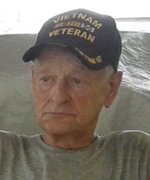 Danny Porter Sr. passed away peacefully at home with his family Monday, June 18, 2018 after a brief battle with cancer. He grew up and lived his whole life in Bloomington, IN where he was an avid Hoosier and Colt’s fan.
Danny served in the U.S. Army from 1965-1969 where he was stationed in Germany and Vietnam. In recent years he enjoyed traveling to Florida each year to meet up with fellow buddies that served with him.
He was employed by GE, RCA, High Speed, and retired from MCCSC Maintenance in 2008 where he loved “cutting up” with all the food service staff.
He enjoyed meeting up each morning for breakfast and coffee with his friends as well as traveling especially to Hawaii and Florida. Danny loved helping others and was always lending a hand to fix or build something.
Danny is survived by his wife of 48 years, Judy (Cox) Porter, children, Danny Jr., Tonya Moore, Kathy Jones, Bill Aynes Jr., Larry Aynes, and Crystal Jacobs, 10 grandchildren. He was brother to Carolina Keith (Gene), Janet Heineman (Chuck), Bertha Blackwell (Danny). He is also survived by his mother in-law, Delia Young, brothers and sisters in-law, Larry Cox (Linda), Joanie Brown (Wendell), Rick Bundy, and Danny Bundy.
He is preceded in death by his parents, Ralph Porter Sr. and Sylvia Hendricks-Porter. Daughter, Ashley Flanders. Brother and Sister, Ralph Porter Jr. and Terrie A. Porter. Brother in-laws, Jesse Bundy and James Bundy Jr. and Father in-law Henry Cox.
Visitation will be 4-8pm Friday, June 22, 2018 and Saturday 10-11am at The Funeral Chapel of Powell and Deckard, 3000 E. Third St. in Bloomington.
Funeral services will be 11:00am Saturday at The Funeral Chapel with Pastor Greg Bowman officiating. Burial will follow at Clover Hill Cemetery where Military Rites will be performed.

365 Days of Healing
Grieving doesn't always end with the funeral: subscribe to our daily grief support email, designed to help you a little bit every day, by filling out the form to the right.

52 Weeks of Support
It's hard to know what to say when your loved ones experience loss. Our weekly newsletter provides insights, quotes and messages on how to provide help during the first year.